Please be advised that Abell Pest Control will be within the Village boundaries completing our annual gopher control program (May- August).

• Within the Village, Abell hand baits the pellets in burrows and then back fills them. The burrows are checked regularly for disturbance and any deceased rodents are removed.
• One advantage to anti-coagulants is that they do not pose a significant risk to non-target animals that eat the bait or poisoned ground squirrels 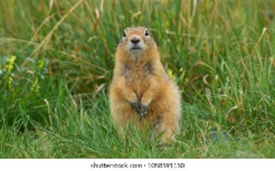 Richardson Ground Squirrels (RGS), locally referred to as Gophers, are a naturally occurring rodent species in Kneehill County and play an important ecological role as a food source for many predators. When populations expand and disperse rapidly, they can pose a significant economic threat to agriculture, as well as severely impact natural ecosystems. For this reason, Agriculture Services recommends developing an understanding of RGS biology and utilizing an Integrated Pest Management (IMP) approach to maintaining gopher populations below threshold limits. A combination of population monitoring and cultural prevention in addition to lethal control measures are commonly recommended strategies for effective control.

Biology
Richardson Ground Squirrels first appear in early spring, with the males coming out of hibernation from the end of February to early March, depending on the weather. Two weeks later, the females come up for a short 10-day mating season. After a 23-day gestation period, the litters are born underground and remain there for the first month of their life. Because of their annual life cycle and foraging habits, control measures such as baiting or hunting are best taken in the early spring when both males and females have emerged, before the litters are born.

Monitoring
The first step in the IPM process is determining what your population threshold limits are and monitoring the population. Regular checks of fields for mounds and burrows and keeping track of the number and density of holes is important.

Prevention
The most important step in an IPM program is prevention. RGS’s prefer short vegetation where they can see their surroundings.

Lethal Control
When the population hits a high threshold level, it’s time to move to the final IPM step, lethal control. These measures are temporary at best, and once the population is reduced, additional measures such as cultural control and prevention as described above should be taken to prevent the population from rising again. Chlorophacinone (Rozol, Ground Force)- An anticoagulant, this is usually sold as a ready-to-apply bait through farm supply stores. It can be used downhole or in bait stations and requires multiple feedings to consume a lethal dose.